Been gone a while but I see no one is reading so it's not a big deal :)

The Impossible Burger. After I posted my Impossible Burger review we went to a different Burger King and the burger was much better at the 2nd location. So much so better that we have been back 2-3 more times. It's entirely possible (ha!) that the first place I had it at does make them well and I just was there on a bad night. But we just choose to go back to the location we have always had a good experience at. However...I probably will not go back to Burger King unless my options are full up.

Back in February we went to a place called Del's Hideout. It's a restaurant and we have seen the sign for it many times from the 8 freeway. It was finally the day to try it out. And guess what? They have an Impossible Burger! So I tried it.

When I got the burger, I was thinking the patty looked a lot like a beef patty. However, these burgers tend to look very much like beef burgers. I took a bite and....wow. It was amazing. I started to wonder if they really had mistakenly given me a real beef burger. Greg had a bite and agreed it was super yum and did taste like a beef burger. I gave it 5 out of 5 stars and named it was my favorite Impossible Burger. If it really was an Impossible Burger?! I was still kind of wondering if it was a beef burger by mistake. We went back a few weeks later but unfortunately the parking lot was full and there was no street parking. It was raining so parking way down the street and waiting for a table seemed like a drag. We ventured off to another place called Jimmy's Famous American Tavern. They also had an Impossible Burger which is what I had my heart set on having one for dinner so that's what I got. It was good but nothing like Del's. I gave it a 3.5 out of 5 stars. This is not saying it was terrible or not worth trying. If you go to Jimmy's and want an Impossible Burger, I think you should try it! It's just not on the same level as Del's...which may or may not have been real beef. I still wasn't sure. Then, last weekend, we went back to Del's. It was confirmed. I did not mistakenly get a beef burger the  - their Impossible Burger is just so good you think they mistakenly gave you a beef burger! If you are in the San Diego area and want an Impossible Burger, go to Del's. You'll be happy you did. Below is a picture of my Impossible Burger and onion rings (ranch on the side).

Leave me a comment and let me know where you get your favorite burger - Impossible or not!


Until next time, remember the words of Edmund Burke: "Evil triumphs when good men do nothing" 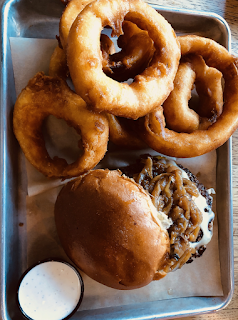