I've been thinking of posting something here but it's been too hard to "talk" about. It's still hard and will always be hard to talk about. I'm sure you understand. He was a special little thing. We miss him a lot. I'm having a hard time just typing this.

He'd been having trouble with hairballs over the last month and we had taken him to the vet in July for it. On Sunday (8/21) it seemed like he had another one so we took him in again. We got a liquid medication that would help greatly and were feeling very confident that this would take care of the problem. Sunday night he wasn't social and just wanted to sleep in the corner of my craft room. He'd done this the previous time, too. We thought he'd perk up by the next day. Monday morning Greg woke up around 5am and went to check on him. He wasn't doing well at all. I got up and we put him on the bed and he took a step and collapsed. We rushed him to the vet hospital. We usually put them in the pet carrier but he always seems so terrified in it so we wrapped him in a blanket and Greg cradled him in his arms like a baby. He barely made a peep the whole way. I know he felt safe in Greg's arms. While driving to the pet hospital I looked over at him a few times. It's really hard to explain, but his pretty green eyes were very expressive and were telling me something that I kept to myself. When we got there they whisked him away and we waited. It's hard to wait for bad news. After some blood tests, they determined he was in renal failure. He'd probably been in renal failure for a month and the hairball issues were actually masking the real problem. Chances are he probably didn't even have hairballs but it presented like that because he has a history of problems with them. His little body just wasn't working well enough to keep things moving in his digestive system. They told us that morning his condition was terminal and he would not recover.

For us, our pets are our children. Loosing them is a pain like no other we have experienced. We find little comfort these days...it's heartbreaking to know we will never see him again.

I took this of him and it captured his personality pretty well. He was so curious. Can you see it? He was into everything all the time. And always wanted to be with people. Such a charmer. I can honestly say that everyone loved Calvin. But no one more than Greg. They had an extraordinary bond. Cat's tend to be aloof but Calvin was more like a dog in that he always wanted to be with people. But no one more than Greg. They were like two peas in a pod. This will sound exaggerated, but it's not. When I was home and Greg would come home, Calvin would run circles around the coffee table until he came in the house. Calvin was so excited to see him. Not a few times ~ every time. Wouldn't it be cool to know someone or something was that excited to see you every single time you came home? I love to see Greg, but I'm not running around the coffee table when he comes home. This is how much Calvin loved Greg. And Greg loved him, too. So much. 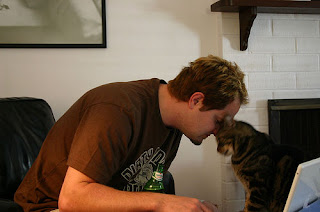 Every story has an ending....for us, this one came too soon. 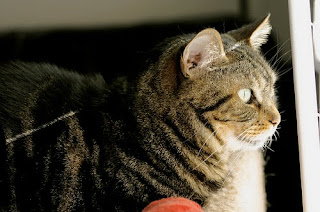 “Those who bring sunshine into the lives of others, cannot keep it from themselves"
~ James Matthew Barrie