We’re Home. After 14 days, and as nice as it was, it’s good to be back home in our own bed and see our babies….the cats. Greg missed his precious Abby. My Mom was checking in on them once a day and when Greg called to check in on the 3rd day, she told him Abby was missing. She said she was sure she was in the house, but had not seen her at all. So Greg was fretting about this…thinking little Abby had gotten out because my Mom tends to be forgetful about the door at times and leaves it standing wide open while she is getting in with her cane and her 500 pound purse. I’m not kidding….her purse feels like it has bricks in it. And it’s huge and she has everything in there. I’d be willing to bet I can find something in there that is as old as the purse and that she will never use and has no idea why it’s in there. Actually, that’s probably too easy because I bet that’s 90% of what is in there. Anyway….she did find her under the bed so it all turned out ok.

So between loads of laundry and sifting through the giant pile of mail, I uploaded select photos you’ll see throughout my post.

Here’s how it all started. On 11/9 at about 1:45pm, we were sitting in the living room watching the TV waiting for our 2pm shuttle to arrive to take us to the cruise ship terminal. That’s when we saw a black limo pull up outside. We looked at each other and our vacation officially started. The limo was just a courtesy upgrade on their part….and it sure made us feel special. It was still decorated for Halloween inside, which I loved. I love Halloween.

Once at the cruise ship terminal, check-in went smoothly, but the wait to get on the ship was long. It took about 40 minutes in a long line to get on the ship. Once onboard, we realized the ship is exactly the same inside as the sister ship we sailed on to the Baltic. Even all the rooms are named exactly the same thing….Michael’s Club, The Rendezvous Lounge, The Waterfall Café…etc. The good thing about this is, we already knew where everything was! Our stateroom was pretty much the same as last time, too. We were on the Sky Deck last time and this time we were on the Panorama Deck. Every day we had fresh fruit, flowers and, at 4pm, we got h'orderves delivered to our room. The only thing we didn’t like (and this is the same for the Baltic cruise, too) is our bed was HARD. They need to do something about those mattresses. 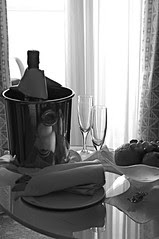 Then it was time for the life jacket drill. I never remember to take my camera for this. People could see us from the boardwalk and we all must have looked like total fools lined up on the decks with our enormous orange life jackets on.

Once back to the room, Greg’s luggage had been delivered and was sitting at the door, but mine was not there. This was a little alarming, but we asked around and found out that luggage was still on it’s way to the rooms. It was 6pm and that’s dinnertime, so we headed to the dining room. When we got back from dinner, we turned down the hall and I didn’t see my bag at the door. I was worried. Greg flagged someone down and the guy asked if it was red and blue?

Oops. Next time we will look in the room before we assume it isn’t delivered.

By now we noticed how rocky the ship was. On the Constellation (the last cruise) there was very little rocking. This does not mean we were stumbling down the halls, but there were times when you did stumble. Before we left I had read some reviews on the ship and there had been some notes about Celebrity Cruises in some kind of litigation with the company that they got the stabilization…..uh….mechanism (?) from. This made more sense to me once we were onboard and I felt how rocky the ship is compared to the Constellation. So they must have corrected that when they constructed the Constellation.

The following day we went to the Aqua Spa…..ahhhhh. I got a mini facial (my first facial ever) and a collagen eye treatment. I was leery about the eye treatment….they always sound too good to be true, but this one really did do what it claimed. Greg also went and he got a pedicure with an ankle & foot massage. We were both happy.

The next morning I got spice pancakes at the buffet. Ohhh…..they were good. But I’ve been having some trouble with breakfast the last few years. All I can really manage to eat in the morning is toast & tea. Anything more than that really does not sit well with me, so I’ve been trying to watch things at breakfast. But they had everything you could want…..healthy to hash. Lunch was the same kind of thing. Tons of options. 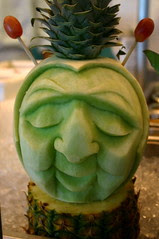 They made everything (except the sugar free ice cream) on the ship. Everything. Isn't that amazing? The kitchens were going 24/7. Here are some of the baked goods: 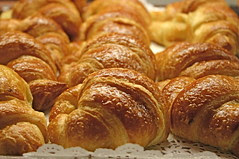 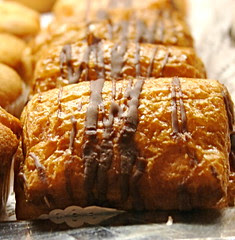 I have much much more to tell - I'm not even to the good stuff! But it will have to be later. Maybe tomorrow if I get a free moment.

Sorry, I know I've been absent for a while.

I've been really busy at work and have been skipping lunch a lot and not taking breaks (which is when I usually blog). I'm really looking forward to Hawaii, but it is actually coming at a bad time.....we "bon voyage" this Friday and will be gone until 11/24.

At work we are in the middle of a huge project and my work load is just going to pile up while I am gone. The deadline for it to be done is 12/14 and I come back to work on 11/26, so there won't be a lot of extra time for me to get my work done. I will be even more busy when I get back :( But I just need to deal with it I guess. We planned this vacation a year ago and I had no idea I'd be in the middle of a project like this or I would have considered going at a different time of year. Everyone says I will come back refreshed and ready to tackle the work, but they only say that because......I mean....what else is there to say? I might be refreshed the first day back, but I know by the 3rd day it will be like I never left. Work just does that to you.

Anyway, I can't wait to just relax. However, I have not even packed! I still have some clothes I have to wash! Very behind on things.

So given all that, don't expect to see much from me until next year. I will post vacation photos on Flickr and if I have the time, I will post a synopsis of our trip.

Oh, and Happy Thanksgiving in advance!

*Waves goodbye and you hear the theme from "The Love Boat" playing in the background*
at November 07, 2007 1 comment: