I have to be honest and tell you I don't really care for garlic bread. I'm not sure what happened because I used to love it. But I've lost my taste for it. Especially frozen garlic bread. There are some restaurants that have good garlic bread, but mostly I'm not impressed.

On a whim we tried Trader Joe's garlic & herb butter. Greg loves garlic bread so we saw this and thought it was worth a try. Even if I didn't like it, I was sure he would like it.

For once he didn't finish off my piece of garlic bread! I usually take a bite or two and I'm done. But this was pretty good :) 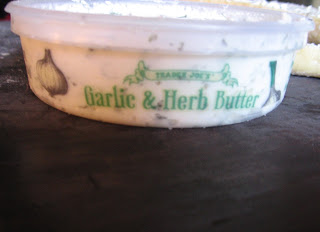 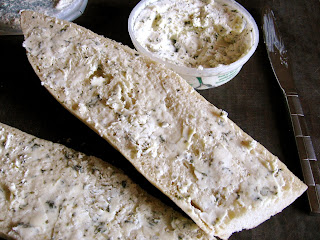 Sadly I forgot to get a picture of it after it came out of the oven! Oh well, you can imagine it looked pretty standard. But the taste wasn't standard at all. Give it a try :)
at February 27, 2012 No comments:

Food on the Table

Have you tried Food on the Table? It's a website that works off of the grocery store(s) you shop at. It selects dinner menus based on what's on sale in the store(s) you choose. You add preferences, the kind of stuff you like to eat & diet restrictions, and it gives you recipes. You can see reviews by other people so you have an idea if the recipe is any good. If you want to make the recipe, you can modify it to feed between 1-8 people and it will give you a shopping list for the recipes you select. You can also look at the nutritional information if that's important for you. So far I really like it!

I'm not sure if it's always free to sign-up, but I had a coupon code which is FEBFREE.
at February 22, 2012 No comments:

Greg made soup Sunday. It's the best chicken noodle soup I've ever had. He's made it before when I had a cold and maybe it's just my imagination, but it did seem to make me feel better. Try it :)

Put chicken in a large pot, cover with water and bring to a boil.

After about 20 minutes, skim off the icky foam that floats to the top.

Turn down to a simmer and cover. Cook for 30 minutes. 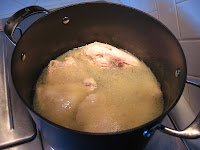 After 30 minutes, add the veggies and the thyme - put the lid on and simmer for another 1.5 hours. 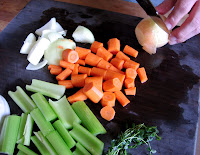 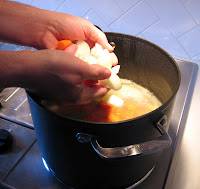 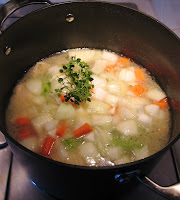 Remove from heat and strain into a bowl that's big enough to hold all the broth.

Put the the liquid and the vegetables back into the pot.

Separate the chicken from the bones & skin, cut into bite sized pieces and put in with the broth. 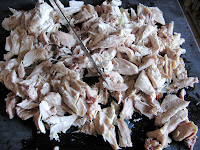 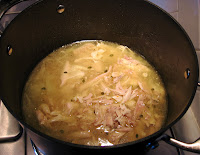 Bring the broth back to a simmer, add in the egg noodles then cover and cook until noodles are done. 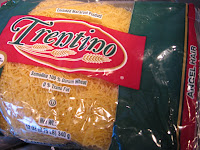 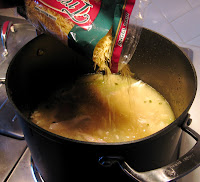 Add another 2 to 4 cups chicken broth to make up for what has evaporated during cooking. 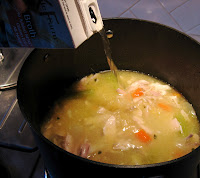 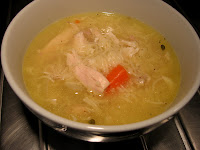 In honor of Valentine's Day, I share this with you.

Have A HOT Valentine's Day!

And, today I want to make hot sauce! The woman in the video reminds me very much of someone I don't like so that was unfortunate. But maybe she'll remind you of someone you do like! Or may she'll have zero affect either way! :)

This is pretty darn cool. I'd really like to make some cheese now :)

**UPDATE: The bacon jam was at hit at the pot luck!

Bacon jam. I know, I know. Totally unhealthy but it's not something you eat all the time.

I'm faced with having to go to a lunch pot luck at work tomorrow. Trust me, if I could find a way to politely decline, I would. But this time getting out of it would be hard to do. I had to think of something to bring that would be easy. I leave the house at 6:45am so I don't have time to be making something before work. I also didn't want to bring anything that had to be either hot or cold because that's just a total pain in the ass. I looked at pot luck stuff on the internet and most everything was a hot dish. Then I saw this bacon jam recipe. I've never had it and it sounded good and it also sounded kinda gross. However, people who had tried it and left comments raved about it! And.....it can be served at room temperature! When I read that part, I decided I was making it. I did consider a few other things off and on because....well....it's bacon jam. It just doesn't sound all that appetizing. But then I figured I could make it over the weekend and if wasn't any good I'd still have time to get something else.

I made it yesterday. While I was cooking the bacon, I got the idea to take pictures of the process. Mostly because of the photo below. I don't think I will ever have another chance to take a picture of 3 pounds of bacon. Again....I know.


Cook the bacon in the oven. This is the only way to cook this much bacon. If you do it on the stove-top, it would take forever and would be soooo messy. 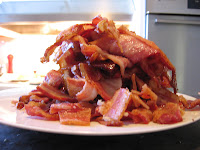 Now cook 4 gigantic onions that have been thinly sliced until they are mostly translucent. 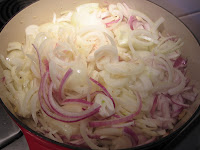 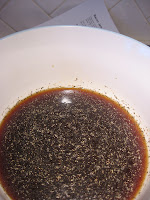 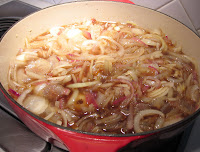 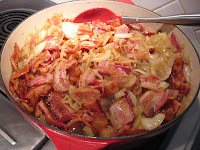 Here it is reduced by half. 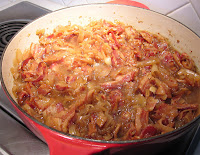 Here it is cooked all the way down and the onions are caramelized. This isn't as dark as I think it's supposed to get, but getting it to this point was probably 2 hours. I wasn't keeping track of the time. I called it done here because I didn't want to risk burning it. After cooking that long, having it burn would have been really sad.

Let if cool off a bit and then zap it in the food processor. I have to admit, when I saw it at this point I was worried. This is not what I call appetizing. If I were serving it to family, that's one thing. But this will be people at work, most of whom I hardly know, so if it looks gross, no one will touch it. And no one wants to have the dish everyone is whispering about and making faces at. 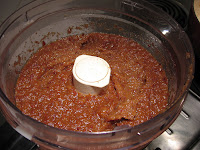 I put it to the true test. Smeared it on some bread and gave it to Greg. He's on the picky side and I know he'll tell me what he thinks. If he made a face or spit it out, I was going to the store for plan B. 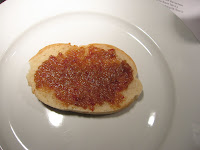 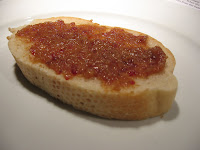 He ate the whole piece of bread and gave it 2 thumbs up! I also tried it and it's good. It's kinda sweet but not a lot, oniony, and definitely bacony. I wasn't able to taste the maple syrup or coffee at all. There is a cider vinegar flavor but it's not overwhelming or too strong. A plus is, it smells really good :)

I think it looks better on the bread so I'm going to make some up on the tray that are ready to eat. That way people who are considering it can try it on an impulse. When people start saying it's good, others will go for it. It's bacon so there will be people who will just see the fat and calories on a slice of white bread....but oh well. I'll let you know how it goes! Wish me luck!!
at February 05, 2012 1 comment:

Passive-agressive BS....I can't even tell you how annoyed I get by this. Don't be one of those people.

I work with people who are passive-agressive to their core. They do it so blatantly but if you call them on it, they act surprised at this revelation. It's really difficult for me to deal with people like this because I don't tolerate BS very well. I usually say what I think and I don't mince words. Then they've become a victim at your expense and play it up.

I've had to step away from people at work to avoid all this. I used to chit chat with people or go to lunch with them, but now I rarely talk to anyone at work and only go to lunch if it's some kind of work related thing. Doing this has really made things at work a lot more peaceful. They're still doing it to each other, but I'm not involved.

The only time this doesn't work is when they are clearly leaving me out and they know I can hear what they are saying. Like having a conversation (loudly) about a new policy and what has to be done. They exchange notes on it but don't bother to give me the information.

"Oh, you don't already have these notes? Oh....I thought you knew...." said wide-eyed in a shockingly innocent tone.

This. Makes. Me. Insane. INSANE.

I'm doing better at not making a comment. It's hard but it helps that I understand what they're up to so I don't play into it. I go back to my work and keep in mind that karma is a bigger bitch than they are.
at February 02, 2012 No comments: