It's interesting. Sometimes things turn out just like you think they will....and then there are times when you're wrong.

Yesterday Greg and I went to the beach for a Valentines Day sunset. We've been to so many beaches and we're running out of places to go. He suggested Mission Beach. It's been ages since I've been down there. I pretty much lived down there with BFF Laura in our younger days. And that's not an exaggeration. We ere down there every dang day pretty much. Do you know how much gas I wasted driving around down there? A ton. But I guess I should not say wasted. I would not trade on those days. Good times. Anyway, I'm digressing. So we went down there and ended up in a small, somewhat hidden, parking lot that is right at the edge of the beach. Laura will know which one because we were there at least a thousand times. It's changed, but it hasn't. I wasn't very excited about the photos I was going to get. I like some "interest" in my sunset photos. Not just sea and sky. And that seemed to be pretty much what we had. So Greg started writing in the sand with a stick. 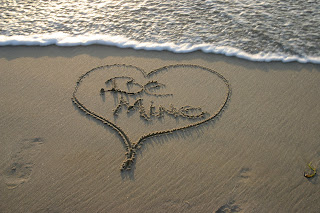 A second after I snapped that picture, we were ankle deep in sea water. COLD sea water. We were not expecting the tide to come up so far. But it made for a nice photo. Then we milled around and he wrote other things...and I snapped photos. It wasn't looking like I was really going to get much in the way of sunset photos. And that was fine. I was just happy to be there with him for sunset. I love him. Anyway....digressing again. There's a jetty made of rocks that extends pretty far out into the ocean and we moved closer to it. That's when things started to change. I call this photo diamonds in the water. Can you see why? 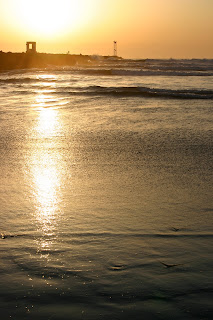 Now I'm going to inundate you with sunset photos. I could not pick just one. The first one is actually the last photo I took, but it will help you to see what I had to work with. 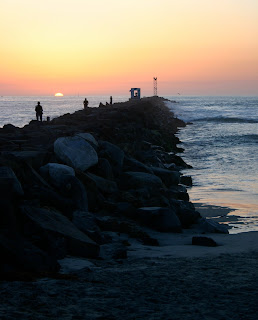 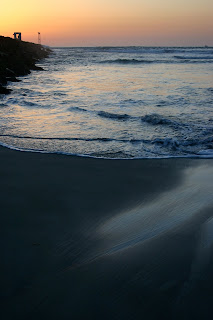 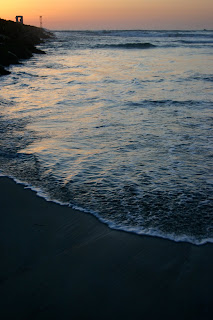 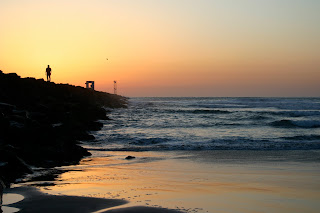 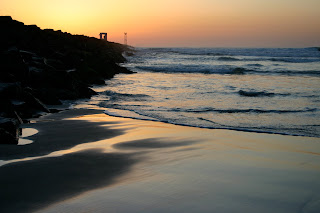 I'm not sure you can fully appreciate how pretty these are. It might be because I was there and know how pretty it was and can see more in the photos because of that. You should click on them to see them larger. The last one just....I don't know....leaves me in awe of nature and how frickin' beautiful it is. It's just water, sand, rocks, sky and sun.....and that's what it I got. Not too shabby.
at February 15, 2010 2 comments: 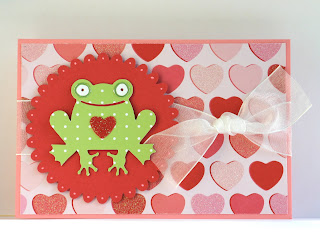 Here's the Valentine's Day card I made. I'm pretty smitten with it. I didn't get a shot of the inside, but it says "smitten" inside. I used my Cricut to cut the frog ~ isn't he cute? The heart on this chest was cut from red paper and I used some absolutely gorgeous glitter Greg got me for Christmas to cover it with. It's iridescent red. I have 12 other colors and they all are iridescent like that....love!

Next are my horrible St. Patrick's Day cards. I may not even post a picture of them. Thankfully I'm moving onto my springtime cards!
at February 14, 2010 No comments:

I've made this a few times for a weekend snack and I love it :) It's fat free! And delicious!

Rough chop the shallot, tomatoes, garlic, cilantro and jalapeno and put it all in a food processor or blender (don't blend yet). Add thawed peas, cumin and lime juice and blend to the consistency you like. Cover and let it sit for an hour so the flavors meld.

It looks like guacamole! Tastes good, too! And for those of you who think it will taste like peas, you are waayy wrong. After sitting for an hour, it's impossible to tell it's peas. Greg and BFF Laura can attest to this.

If you want real guacamole flavor, cut it down to 1 cup peas and 1 avocado. It will still be less fat and will have that guacamole flavor. Avocados are full of fat, albeit good fat, but anywhere you can just fat and calories is good :)
at February 11, 2010 No comments:

Did you all see Pink's performance at the Grammy's? All I can say is.....beautiful. If you have not seen it, you should watch it. And even if you did see it, it's so visually beautiful that I can watch it over and over. Plus, I really love that song.


Glitter In The Air

Have you ever fed a lover with just your hands?
Close your eyes and trust it, just trust it
Have you ever thrown a fist full of glitter in the air?
Have you ever looked fear in the face
And said I just don't care?

It's only half past the point of no return
The tip of the iceberg, the sun before the burn
The thunder before lightning, the breath before the phrase
Have you ever felt this way?

Have you ever hated yourself for staring at the phone?
Your whole life waiting on the ring to prove you're not alone
Have you ever been touched so gently you had to cry?
Have you ever invited a stranger to come inside?

It's only half past the point of oblivion
The hourglass on the table, the walk before the run
The breath before the kiss and the fear before the flames
Have you ever felt this way?

There you are, sitting in the garden
Clutching my coffee, calling me sugar
You called me sugar

Have you ever wished for an endless night?
Lassoed the moon and the stars and pulled that rope tight
Have you ever held your breath and asked yourself
Will it ever get better than tonight? Tonight
at February 08, 2010 No comments:

BFF Laura emailed me asking how Henry is doing. I wrote back and I'm not sure why, but she said I should post all this. So here it is:


BFF Laura: Which reminds me! I keep meaning to ask you about Henry. I've seen what you and Greg have been writing, poor thing. How is she doing?

Me: Oh Henry. Little girl is having a rough patch. I forget what day last week it was, but we came home from work and she looked funny....like she couldn't see where she was going. And her pupils are fully dilated.....you can't see any of the green of her eyes. So we took her to the vet after dinner and they said her retinas have detached from her eyeballs and she's blind. They said the reason for it is high blood pressure. She also has hyperthyroidism which is when your thyroid gives off too much hormones and you loose weight rapidly. She has been getting realllly skinny, but we thought it was just because she's old....you know, old people get small and frail. Anyway, a year ago when we had that thing on her chin looked at she weighed 9lbs. She's down to 7lbs. That's a lot of weight for a cat to loose in a year. Plus, she needs to be heaver than 7lbs. So she's getting wet food (a major treat at our house) twice a day and Calvin hates her because she's the only one who gets it. His favorite thing in the world is wet food and Greg....in that order. But anyway. We have to torture her and give her medication for both issues. Torture for us, too. We have till end of next week to see if her sight comes back. If it ain't back by then, it ain't comin' back. Greg thinks she's blind for good. I'm holding out hope for her to get partial sight back. She can find her water/food bowl and her litter box, but she seems really confused all the time....and rightly so. She's got kitty himers (kitty alzheimers) and now she's blind as a bat. Not a good combo. But to be honest, I think she's doing pretty good considering all that. She finally has stopped going under the bed and will sleep in her cat bed in the living room again. That's a positive sign. I believe everything happens for a reason. Not sure why this has happened, but at some point we'll know why. And I think God gave her to us because he knew she'd need cat parents who would take care of her. And Suzie, too. He might have sent Calvin to us because he thought that was a funny way to drive us crazy. 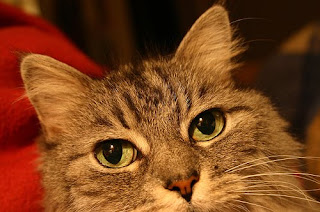