In a previous post I said I was letting things go more and more ~ not holding onto bad feelings. It takes a lot of energy to hold onto things. I'm applying this at work in a big way. I'm trying not to let things get to me, but I spend so much time there and the consistency of things that annoy me just builds and builds. The biggest thing is the people I work with. It just amazes me how rude and inconsiderate people can be. How can there be so many of these people? I really need to get over this amazement at some point....that would help a lot. But I still scratch my head over this. I've learned that I just need to realize they are not going to miraculously change. I guess I had kept thinking they would.

Back in mid December I got everyone I work closely with a small gift for Christmas. I wrapped them and handmade gift tags. I'd planned to give them out at our last meeting 3 days prior to the holiday break. As the day approached, the meeting was cancelled. I got the gifts out and was going to pass them out. Something stopped me. I sat there and asked myself *WHY* I had got them anything in the first place? I hardly like any of these people! But you know, 'tis the season, spirit of giving, blah, blah, blah. However, I didn't hand them out. I put the gifts back in my desk and held off. The next day I thought about handing them out again, but didn't.

I took the gifts home that night.

The lesson I learned from doing this so many times in the past was, these people have displayed actions that show me they don't deserve this from me. And that's that.

I'm letting go of the BS from the past and keeping a distance. I work with them....we're not friends. I'm polite and still interact with everyone in group situations, but I've dropped the day to day chit chat and that kind of thing. It's so much easier and I'm happier :)
at January 26, 2010 2 comments:

Well you already know one resolution is to document my cards better, so that cat is out of the bag.

I looked at the resolutions for last year:

Bake more: Ummm....didn't do so good on this one. I even bought a frozen pie for Thanksgiving :(

Write: I only wrote about 3 pages of stuff....so not so good on this one either.

Last year I added the ones I didn't do from 2008 to the list again. So that means I have not baked, decorated or written stuff for a while. I think it's time I forget those....it seems fair to say if they have fallen by the wayside this long, they are not likely to get any action this year.

Grow the herbs we use most...and don't kill them
Take lunch away from the office (this is on my 101 things list)
Learn to do perfect french pedicures
Use the Wii Fit
Submit 5 cards to craft magazines
Document card making

Here's my card for Kristina Werner's Color Inspiration Challenge. She isn't doing many of these challenges anymore, so I was excited to see one come along :) 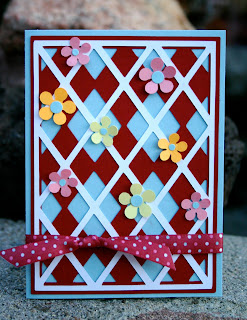 I'm an argyle person so this card is very much my style. I love the color combo. I used my Cricut to cut the argyle pattern and the flowers. I thought about adding a sentiment, but the more I looked at it, the more I think the pattern/flowers/ribbon is enough and it can be used as an any occasion card. I've had the ribbon for years and it just happens to have all but two of the colors so I just had to work it into the design. Hope you like it!
at January 11, 2010 6 comments:

One of my resolutions is to document things better. I make cards for many occasions and I rarely make one for myself to keep. Starting with the first card of the year, I am going to start photographing each card so I can look back at what I've done. This is my New Years card. 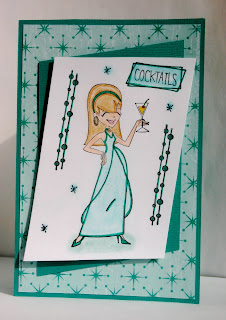 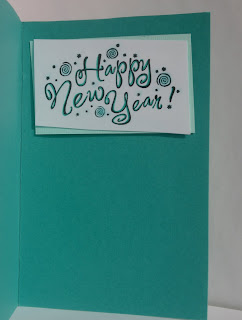 You may recall a post I did last year saying I had ordered a stamp and it never came so they had to send me another one...blah, blah....well, this stamp of the girl with the cocktail is the stamp! I saw it and just had to have it for a new years card. I don't usually boast about my work, but I really like how this one turned out. I was going for a retro feel with the background patterned paper and the offset placement of the teal and white paper...and of course her retro hair :) The string of beads, cocktail sign, asterisks and "happy new year" stamps are all parts of another stamp set I bought to go with my cocktail girl. Don't they look great together? Sometimes things just work out perfectly. It's a good way to start off the year. 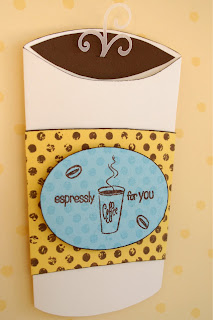 I made a card like this for my brother-in-law Bob one year for his birthday and I thought it would work well for this challenge because of the colors. I used an actual sleeve for a cup as a pattern for the sleeve on the card. You remove the sleeve and the card opens. The stamp set is one I found recently from Hero Arts called "coffee". Everything but the swirly steam was cut by hand. The steam was cut on my Cricut.

It's said that when you forgive something, you feel a sense of relief because you no longer carry it in your heart and your head. It's also said that forgiving something is one of the hardest things to do.

The true meaning of the word is:

1 a: to give up resentment of or claim to requital for

I'm not sure anyone really forgives in the true sense of the word. I think most people say they forgive but in actuality they just resolve to be polite and not let it further interfere in things. I'd bet money I am right about that because I don't think we, as a society, have developed in a way that promotes forgiveness. Think about that for a minute. You just really don't see true forgiveness very much. As an example, when you watch the news or talk shows and you see stories of a mother forgiving her child's killer, we are stunned. As a society we see that as an unforgivable act of violence. But even "small things" are deemed unforgivable these days.

I have nothing even close to that example to forgive, but I am getting better at forgiving or "letting go" of the things that I've held onto and also not letting new things bother me. To be honest, I just don't care anymore. And I don't mean that in a bad way. It just means when things happen, I don't feel like giving it any of my time and energy....it's not worth it. I think this is due to age, but not entirely sure.

Now this isn't to say I have written off every single thing and I glow with forgiveness (hee!). But it does mean a new chapter in life and it's all for the better....my better. I don't think I can cross that off my list just yet, but maybe by the end of the year :)
at January 04, 2010 No comments: